"To move, to breathe, to fly, to float, To gain all while you give, To roam the roads of lands remote: To travel is to live"
(Hans Christian Andersen)

The theme of the last couple of months at Etu Moana Boutique Villas has been spectacular weddings and wondrous whales. We have been blessed to host three delightful couples from all over the globe who exchanged their vows right here on the beach. One couple even had a dramatic display of whale action during the service (which was so fitting, given they were quite fanatical about the whales breaching off the reef just out front of Etu Moana Villas, and in fact booked their wedding date to coincide with the humpback season in Aitutaki) ! Whale photo below courtesy of guest / groom Bruno. 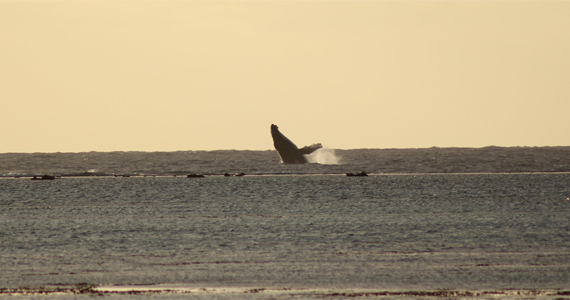 As we head into October and the remaining three months of 2019, we hope you have Aitutaki on your list for the near future …. remember that our specials can be found at the end of this Newsletter…  the team await with smiles from the isles.

As we approach the Christmas period and plans are coming together for families and festivities, Etu Moana is looking forward to welcoming a family group who have booked all Villas for a week long Christmas celebration. We do have some rooms available prior to the 21st and after the 28th with 2 Villas available for New Year’s Eve, for those still wanting to escape the rat race!

Continuous Improvements
NIKAU and beyond;  The lads have achieved two new nikau roof thatch projects recently, both Villa 6 above the pool and the laundry / day-room building are sporting smart new-look nikau.

There have been a variety of assignments around the property, mostly around the pool and bar area; with freshly coated furniture and louvres, fresh paint, new and larger ‘library’ shelving plus we are getting ready for a new-look pool-bar with a couple of projects underway … you will see on your next visit! 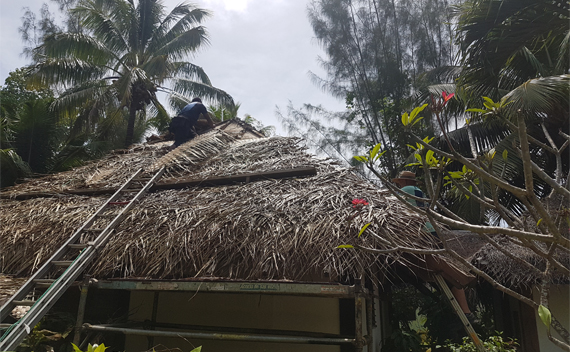 Commitment to the Community

Golf Ambrose
MResort Managers  Nick & Pip recently attended a ‘golfing ambrose’ which was a community fund-raiser for two talented local kids to compete in canoeing/kayaking at an international level and represent the Cook Islands.. Not knowing a bogie from a birdie, ‘handicap’ was truly the appropriate golfing term however the local golfing fraternity were extremely  accommodating and fun was had by all. Most importantly over $7,000 was raised.

Regular guest Candi Glenn came along and helped with the Koru Café food stall, she was a very welcome Etu Moana ‘support-staff.’


Constitution Celebrations
In August the island was alive with colour, costumes, drums and dancing;  August is a special month for the Cook Islands and the 2019 celebrations on Aitutaki were a true testament to the passion for culture, music, dance, and national pride. ‘Te Maeva Nui’ is a week long Event which commemorates the rich Cook Islands cultural heritage; it is a time for the people to reflect upon the journey their pioneering leaders took to attain the right to self governance.

The Etu Moana Staff were all involved in various capacities within their villages, the most committed group was the team from Tautu Village – Terangi  was the costume designer and creator for the various performances; the Choir, the action song,, the Ute, the drum dance plus the childrens’ competition.

In the main event between the Villagers, Terangi, Endes and Alone danced and drummed for their village, Tautu, and came away with some prizes. 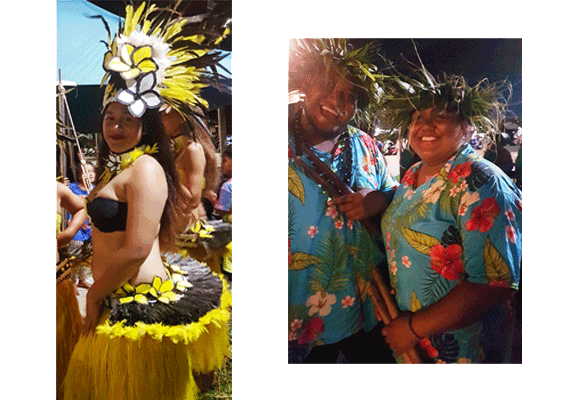 The Team
The team have worked hard the last few months with the Villas being mostly fully booked through the Aitutaki ‘winter.’  Judy moved from her role in Housekeeping into the Front Office and her laugh can still be heard around the Villas as she takes care of guests at check-in and all other guest services. She is also a great masseuse and we recommend a treatment – perfect relaxation for your island get-away. Judy is seen here helping with the wedding arrangements for one lucky bride who is soon to hold this gorgeous bouquet. 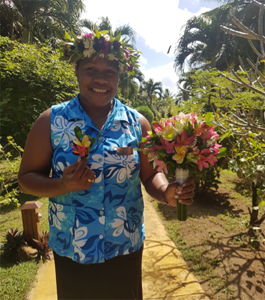 Our Etu Moana Stars
The team voted for their ‘staff member of the quarter’ late September and we had a ‘tie’ – with the same number of votes each for our winning duo; Terangi & Endes. Their certificates and cheques reflect their tireless work in running the pool bar breakfast and maintaining the grounds, respectively. 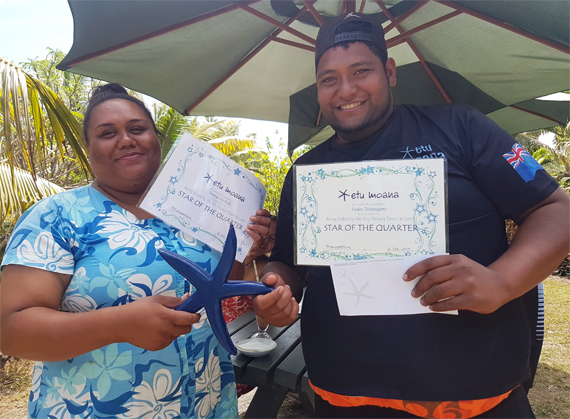 The Legend of Ru
According to the legend, Aitutakians descend from Ru. Back in Havaiki, he noted that the valleys were crowded & the hills were covered with people. With his four wives, four brothers & twenty unmarried tapairu (women of high rank), he set sail in the canoe, Ngapua-Ariki, to seek a new home. As various dangers were encountered, he allayed the fears of his crew by confidently stating, " We shall not die.. Am I not Ru, the man who was girdled with the red belt of chieftainship and who knows the things of the air and the things of the sea." During a storm he addressed the Sea-god Tangaroa--." O Tangaroa, in the illimitable spaces of the unknown,
Clear away the clouds by day,
Clear away the clouds by night,
That Ru may see the stars in the sky,
To guide him to the land of his desire,"

On the sixth day of the voyage, and the ootu (full) night of the moon, Ru sailed in through a passage in the reef on the North-East side of the island. The passage was named O’otu, from the night of their landing. The island was named Utataki- enua-o-Ru-ki-te-moana (derived from utauta, a cargo, and taki, to lead, it refers to Ru leading the valuable human cargo over the sea). Another name given to the island is Ararau-enua-o-Ru-ki-te-moana, Ararau is to search for land at sea with a canoe & the name applied to the island refers to Ru's search on the ocean. The first name was shortened to Aitutaki, and the second to Araura.

All true Aitutakians trace their descent back to one or other of the twenty tapairu women of high rank who accompanied Ru.

Our oral tradition in chants, legends & geneologytraces Ru back to the island of Tubuai in the Australs.

WHAT'S GROWING
The spring grounds are alive with colour -pink and yellow frangipani, many hibiscus, orchids, tiare maori and bouganvillia. 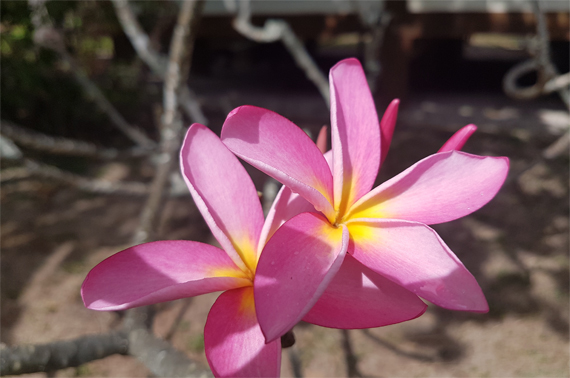 Sustainable Tourism
In our eternal quest to being a green resort and minimizing the use of fossil fuels, Nick and his team have been working on the solar energy here at Etu Moana, by tweaking the solar hot water cisterns to achieve maximum efficiency.  It is pleasing not only to see the power bill shrink but to know our environmental foot-print is in-check.

Weddings
As previously mentioned, 3 charming couples wed here at Etu Moana recently, we were also blessed in the last two weeks to have two couples stay for wedding anniversaries – Dane and Emma wed here in 2016 and Jan & Bruce in 2009.  Congratulations to Nina & Bruno (initial picture of this newsletter), Anca & Lucasz (below) and Bill & Lisa. 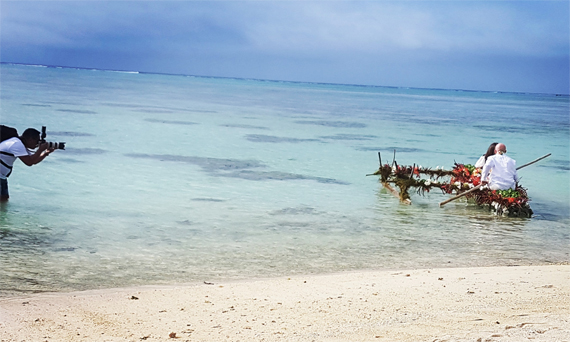 In early September it was a very special honour for Etu Moana Villas to 'host' the wedding of one of our team Ruanoo Mose, whom many of you will remember during her tenure in Front Office. . Ruanoo and Rio exchanged their vows right here in Aitutaki watched on by family and friends. An extremely photogenic couple, we wanted to share with friends and guests of Etu Moana who remember Ruanoo and her dedication to the Resort. We wish Mr & Mrs Kavana all the very best for a wonderful life together – Congratulations.

A big week in a little paddling paradise
Not long now until the legendary Vaka Eiva and Motu2Motu; our Cook Islands Outrigger Canoe yearly events. Vaka Eiva in Rarotonga followed by Motu2Motu in Aitutaki –

2011 saw the creation of what was only a simple idea of seeing the Aitutaki Lagoon from a different perspective and making a race of it. From that idea Motu 2 Motu was born.

Registrations are now closed for the event, but we have a couple of rooms left if anyone would like to book in and join the spectator boats. 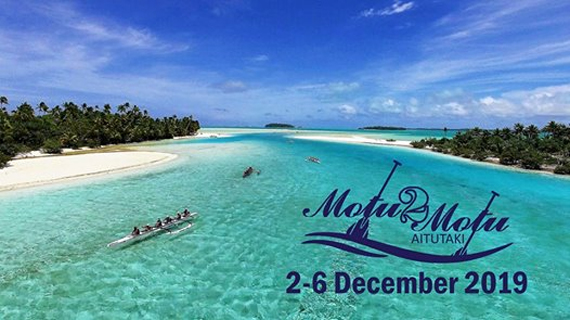 Tripadvisor
Our lovely neighbours at Aitutaki Escape have taken the lead in the battle for being the best accommodation provider on the island, however we still receive wonderful reviews and thank you very much to you, our guests, for taking the time to share your compliments for our fabulous team of staff and villas.  We thoroughly appreciate feedback and reviews though various channels, and we are passionate about hitting the top spot again for Aitutaki Accommodation so reviews, reviews, reviews please!

Stay friends
As our Facebook friends, we continue to enjoy sharing photos of life on Aitutaki and around the Villas. We were blessed to have a photographer in our midst who managed to capture the whales breaching just off the reef in-front of the resort with his zoom lens while lazing on the sun-lounger, thanks to Bruno, one of his shots is at the start of this newsletter.

Book an Absolute Beach front Villa for 4 nights + and we will send you out on the lagoon for a private charter with White Pearl to snorkel and ‘motu-hop’ as you wish for 4 hours.

Either email onthebeach@etumoana.com directly or make an online booking and use the promotional code ‘Pearl’ (Subject to availability).

15% discount for direct bookings
Our fabulous special continues into 2020 so you, our direct guests, benefit when you stay in one of our Beach-View Villas.

Kia Manuia from All of the Staff here at Etu Moana. 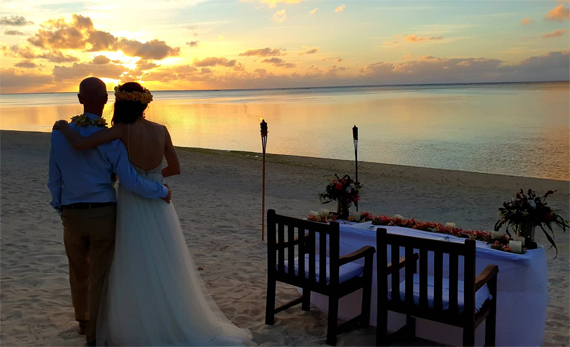